Dick posing in the cockpit of a C-47 on an airfield in England prior to the drop in France on D-day.
On the 16th December the Germans launched the famous counter-attack in the Ardennes. Our division was in a restcamp at Sissone that the time. We had jumped in Holland on September 17 and had fought in Holland until the front stabelized in Holland somewhere in October.

The battle in the Ardennes was a terrible battle. Fighting the Germans was bad enough, fighting in the extreme cold added to the misery. We were called to help at once and my unit and I wer in the battle on the 17th of December 1944. There was not much of a frontline, the Germans seemed to be everywhere, even dressed in American uniforms, and caused many Americans to be killed or wounded. I spent Christmas fighting in Belgium. On Christmas Day 1944, we were attacking the Du Mont Ridge near Gorrone, Belgium which the Germans held. we had 132 men. After one terrible day of battle only 29 men survived the attack. But we did capture the ridge and forced the Germans to retreat. The snow was very deep, and the temperature was only ten degrees (Fahrenheit) below zero. We had no hot food, because my unit was cut off by the advancing German troops. We only had our dry rations, and one blanket each to warp ourselves in at night It sure was cold that night on the ridge, bot my feet got badly frostbitten and I still suffer from pain until today. During the battle of the bulge I was hit in the chest, which ended all further combat for me. I still have complications today because of that bullet. I received the purple heart for being wounded in action during the war. My unit was relieved in February 1045 at which time the tide of the battle changed and the Germans lost the war. 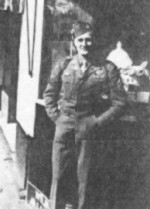