Captured in the Ardennes. 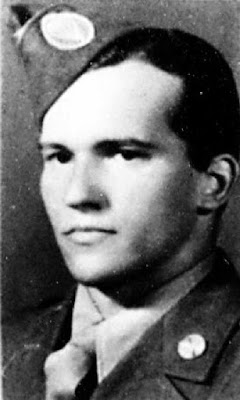 Twenty two year old PFC Downey, waiting for an early morning advance at 0400 in the morning of 7 january 1945 had an attack of dysentry. As he was returningfrom a field to the road again he was taken prisoner by two Germans in white snow capes near the village of Arbrefontaine, Belgium. Downey was taken back to a house some miles away and put in a cellar with another American, where both were well fed and well guarded. The Germans took Downey's gloves, overcoat, billfold and dogtags.

On January 10, 1945 heavy artillery hit the house, wounding the other American and the guards. Downey escaped cross country and for two days continued toward the West. He hid in a hay stack the first day, and then waded a river, shoulder high. Finally on 13 January, near Vielsalm, Downey, hungry and exhausted, walked into a small town, hands up ready to give in to the Germans. Instead of Germans he walked straith into the American 75th Division.
Source: Escape and Evasion report 2838.
Image source: www.508pir.org