A Different Kind of Christmas

"Freedom: We cherish and abuse it. As Americans, we all enjoy our freedom, but relatively few of us have been called upon to defend it with our bodies and our lives. Seldom do we stop to think about the contributions and sacrifices of those Americans who have fought in past wars.

This, then, is intended to remind us of those unwarlike warriors who have fought under our nation's flag in the name of freedom. Further, it asks us to recall the contributions of those gentle infantrymen among them. Men like my dad." (-Dan Shine)

Moments before, he'd been advancing eastward with his rifle Company in near total blackness. From around a bend in the dirt road had come three tanks. As the tanks got closer, the G.I.'s had realized that they were facing German Tigers. The soldiers on the right had climbed an embankment and sought cover behind rocks and trees; for those on the left, the only available cover was a drainage ditch covered with ice. As they jumped into the ditch, the ice broke, soaking them. 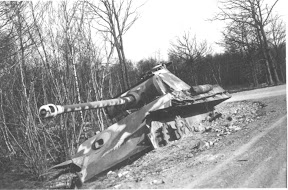 The tank (actually a Panther V) destroyed by Corporal Weigand of King Company, following I Company up the dirt road. The corporal was killed in action in the fighting at Grandmenil.
Closer and closer came the Tigers. Just as the lead tank had almost reached Shine, one of the G.I.'s on the embankment panicked and began firing his rifle at it. The tank came to a sudden stop just an arm's length from Shine; the turret began to traverse toward the slope as the tank started to fire its cannon and rake the American positions with machine gun fire. Shine looked around; there was nowhere to escape to. He could only continue to squat in the muddy water and hope for deliverance--or a quick end. The combined noise of the tank's engine, cannon and machine guns was almost deafening; in the distance he began to hear the screaming of the wounded infantrymen.

In moments, the column of tanks began to advance again. What now? Would there be German infantry following? Shine thought of the previous Christmas he had spent at home with his family in Connecticut, and suddenly felt lonely and forsaken; would this be a slaughter? To his young eyes, the situation appeared hopeless.

Their landing in Europe hadn't been a dramatic one; Item Company, 289th Infantry had come to France on a troop ship, and docked at Le Havre. Their division, the 75th, was one of many that had been hastily formed for the final big push the Allies would make into Germany. The weeks that had followed their landing had been filled with long, monotonous autumn days, bivouacked in a muddy French meadow.

Then, on Christmas eve, without warning they had been loaded onto roofless semi-trailers. Packed too close to do anything but stand, the infantrymen had watched in amazement as their trucks roared eastward for four hours through the cold night, down the narrow dirt roads of France and then Belgium.

No one had told them what to expect; they had no idea of the massive German penetration of the Allied lines that was taking place. German tanks and infantry had, in a surprise attack, created a huge "bulge" in the American lines in the Belgian forest known as the Ardennes. The Battle of the Bulge had not even been named yet; but it was to be a widespread and bloody conflict, as Nazi Germany fanatically attempted a last breakthrough and the Allies fought desperately to hold onto their positions.

Shine estimated that they were speeding along the dirt road at about sixty miles per hour. Other vehicles on the road tried to make way for the convoy of trucks which were traveling through the darkness without the aid of headlights. If another vehicle failed to clear a wide enough path, it was smashed out of the way by the semis, which never even slowed down. The realization began to grow within Shine that something was seriously wrong wherever they were headed, and that they would be expected to help make it right.

The Allied generals had ordered the 75th to move up and relieve the 3rd Armored division. Outside of Grandmenil, the men of Item Company disembarked from their trucks and set out on foot toward the village. As they advanced, they were met by elements of the 3rd, who were retiring from the field.

"Nothing. All clear!" Item Company moved forward, reassured. They advanced in two files, one along each shoulder of the road. Down the center of the road came the 3rd, who were pulling back to regroup. Shine's company passed troops moving toward the rear on foot, along with a number of Sherman Tanks, jeeps and halftracks. Some time after the last of the 3rd had passed through them, they saw three more tanks approaching, and hadn't recognized them as the enemy until it was too late. 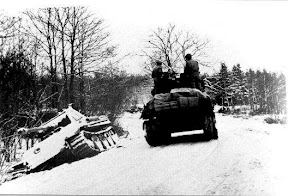 The Panther V tank, destroyed by Corporal Weigand of K. Company.
It was almost 0100 hours, and Shine continued to crouch in the ditch. The Tiger had stopped firing now, and had begun to move toward their rear. When the Tiger was about 100 yards away, an American bazooka team fired one round into its radiator, disabling the tank. The other two tank crews, seeing the flash and the disabled tank blocking the road, turned and made for the safety of their own lines. The threat eliminated, Item Company re-formed on the dirt road and continued their march on Grandmenil. Shine's boots and wool trousers were now soaked, and would remain so for many days.

Throughout the early morning hours, the infantrymen marched up the snowy dirt road, through the forests of the Ardennes, and onward toward Grandmenil. Shine and his squad led the advance, marching warily forward with their rifles poised and ready for instant action. With the moon and starlight obscured by the heavy overcast, it would be nearly impossible to spot a dug-in enemy until they were almost on top of him. Such were their fears as they emerged from the sheltering woods and entered the fields surrounding Grandmenil.

The M-1 "Garand" rifles the infantrymen carried were a familiar burden on these marches. They weighed almost ten pounds, and quickly sapped the strength in the soldiers' arms. But the G.I.s loved their M-1s for their awesome firepower and deadly accuracy. The M-1's 30-'06 cartridges could propel a copper-jacketed slug through a tree and drop an enemy soldier hiding behind it, if such was necessary. To be among a rifle company firing M-1s in battle was truly a deafening experience.

At dawn on Christmas day, Item Company waited at the edge of Grandmenil, a village so small that it could be crossed by foot in less than five minutes--unless, of course the village was filled with waiting German soldiers--and it was. The task of liberating the village had fallen upon the Americans' young shoulders. As the soldiers waited for the order to attack, the Germans began an artillery barrage of their positions.

Item Company was to attack the village with the support of Sherman tanks. Two of Shine's friends huddled behind one of the tanks, seeking shelter from the German small arms fire that had just begun. As Shine watched, a shell landed and exploded near to the two and flung their bodies against the tank. They were killed instantly; there were almost no visible wounds, but the concussion from the explosion left the two dead Americans looking like lumps of bread dough thrown and flattened against a wall.

The Americans commenced their attack. The Sherman tanks advanced up the village streets first, firing their cannons point-blank into the occupied houses of Grandmenil. Then the riflemen followed. First they threw hand grenades into the houses; immediately after the explosions, they sprayed the insides of the houses with rifle fire, and then entered.

Shine and another young soldier entered one house. Inside the house, a dazed German reached for his gun. There was no time to ask him to surrender; the soldier with Shine quickly raised his Colt automatic pistol and fired. The .45 caliber bullet hit the German soldier squarely in the forehead, and the top of his head was blown completely off.

The Germans fought desperately; the Americans were forced to take Grandmenil one house at a time. As Christmas day progressed, many young Americans and Germans made the ultimate sacrifice for their countries.

At day's end, Item Company had driven the Germans from Grandmenil, and had dug their foxholes in a defensive line along the edge of town. Twenty four hours earlier, none of them had ever seen battle; now they were veterans.

Christmas night would be another cold, cloudy night with temperatures below twenty degrees. The winter of 1944-45 would be remembered as the coldest winter in forty years, and the men of the 75th spent most of it outside, with frozen feet. As he settled down for his first sleep in two days, Shine became aware again of his feet, which were painfully cold. Funny, but he hadn't noticed them all day.

Behind him, Grandmenil's ruins smouldered and burned. Shine thought of his grandmother's hometown of Zell, in Germany's Moselle valley fifty miles to their east. He couldn't help but wonder if he had been fighting against any of his German cousins that day, or if he would face them on some future day.

They couldn't use their sleeping bags that night--"Purple Heart Bags" they were called. If the Germans counterattacked during the night, the Americans could be bayoneted in their bags before they could free themselves and reach for their weapons. So Shine and the rest of Item Company lay in the frozen earth, with their frozen feet and shivered themselves into a fitful sleep. A sleep filled with thoughts of those whom they had killed, and those friends who would never be going home; friends who now lay frozen on the snowy ground of Grandmenil.

And meanwhile, back at home, choirs were singing of Peace on Earth, Good Will to Men.