An American soldier in an German concentration camp 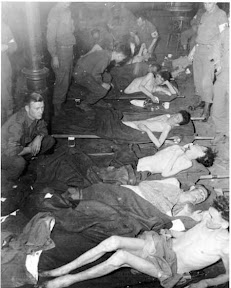 Liberated US POW's from Bela. Winfield Rosenberg is the first in front on the photo
Winfield Rosenberg was on of the many men from the 106th Infantry Division that was captured during the early advance of the Germans. Two complete regiments of the 106th surrendered after being cut of from the other American forces. This was after Bataan the largest surrender of American forces. The POW's where marched to POW camps in Germany. 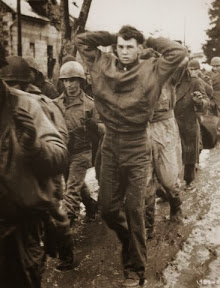 US Soldiers taken prison during the battle of the bulge.

On February 8th when the Americans had just crossed the Rhine, on one of the daily roll calls in the camp the Germans picked out 350 men of whom they knew or thought were Jews. these men were put on a train again. A possible reason for this German action was that they were afraid that the Jews would revolt, now that the Americans forces were approaching. The men were put into boxcars. Sixty men in each car.They traveled for five days. Once the Allied Air force strafed the train, and caused several casualties among the American POW's. After the dead were buried the train continued it's way and finally the Slave labor camp Berga, near the Czechoslovakian border was reached. Rosenberg and the other GI's were forced to work day and night in the mines underground. Rosenburg thinks the Germans were building ammunition factories underground there. The Germans used dynamite to blow up parts of the mine, after which the slave laborers were send in to remove the rocks from the dynamited shafts.

The patch of the 106th Infantry Division (Golden Lions).
On one occasion two men tried to escape. One of them was shot while on the run. His body was placed next to the latrine to function as example for others. The other man was tortured by the Germans and then worked up to the point that he would certainly die. He died in the bunk below Rosenberg's.

The barracks were two miles from the mines, which the men had to walk daily. The hard work and the lack off food weakened all the men severely.

On March 23rd the men that had survived the work in the mines were send on a death march eastward, away from the Allied forces that were pushing toward the Czechoslovakian border. This march would take it's toll among the POW's the men that could go further were left to die along the road. They kept walking until they were liberated by Russian soldiers on April 10. Rosenberg had weighted 172 pounds when he entered the Army. When he was liberated he weighted just 80 pounds. None of the men that were on this death march from Berga weighted over 90 pounds.

The americans that returned from Berga faced a government that refused to believe their story. Their destination had been kept secret when they left Bad Orb. It would take fifty years before recognition came for the ordeal that the men had gone through.